Let's admit it; the last three centuries have witnessed dramatic changes in global human living standards and development index, a lot more than the previous 1000 years of human history. The fact that technology and rapid industrialization could bring in such a massive transformation in the way humans carry out work or interact is astounding. We owe this transformation to the age of the industrial revolution.
The Industrial revolution altered world trade & economic scenarios forever. Although we have read about the 18th-century industrial revolution in history class; how steam and water-powered engines and factories flipped the European and American economy & society for good; we should bear in mind that that was not the zenith of the revolution. In fact, according to Klaus Schwab in his book The Fourth Industrial Revolution, there are four distinct eras of the industrial revolution in history, including the one undergoing currently. This blog emphasizes the fourth one, which is popularly known as Industry 4.0.

Before diving into Industry 4.0, we need to take a step back and revisit the previous eras of industrial changes.

Everything started right here. The first industrial revolution began around the early 1700s when it was found that heating water produces steam which moves things with enough pressure. Then, around the beginning of 1760, the development of steam engines changed the face of locomotion. This newfound technology put a stop to animal and human labor-powered tools and machines.

This era appeared at the start of the 20th century, introducing assembly lines and steel to mass-produce products with more tenacity and durability. This era also saw the emergence of gas, oil, electricity as significant power sources to drive factories, modes of transport, and overall productivity. Add advanced communications such as the telephone and telegraph; the 2nd industrial revolution pretty much set the tone for the 21st-century world.

This is the post-WW II era, which begins in the 1950s. This age saw increased use of more digitally inclined technologies like computers, electronic devices, the internet, semiconductors. In addition, the digitization of factories helped automate the manufacturing process to a great extent, thereby relieving manual and analog dependence on manufacturers.

Experts suggest that this falls under the current era, which is the 21st century, characterized by increased digital technology, automation, and cyber-physical systems. Usage of automation, data collection, data analysis, physical-digital connectivity has made production far more efficient, smoother, and better than the previous systems. Thus, this era of the fourth industrial revolution is also known as Industry 4.0.

To define Industry 4.0, we need to understand the concept that sums up this era. Nowadays, more and more domains are being interconnected via digital means, making it easier to relay & process system information. Moreover, since products and means of production are intertwined, they can communicate, enabling efficient output, smoother optimization, and value creation.

Hence, Industry 4.0 can be defined as "a new age intelligent system setup between machines and processes which relies on information, data, and analysis to drive production and value."

Industry 4.0 had revolutionized the meaning of interconnectivity in epic proportions. It presents a more comprehensive, connected, and holistic approach to manufacturing and productivity. It encourages physical and digital medium overlap, allowing for better collaboration across various departments, partners, vendors, and domains. Since it has enabled automation to permeate every aspect of manufacturing, it provides for data generation and evaluation. This helps business owners to have a better understanding of their process. As a result, they can have better control on production. It allows them to leverage data to boost output and drive growth.

Computers were first introduced in the third industrial revolution. Back then, computers were a new kind of technology for the already established factories. Now thanks to the new wave of the industrial revolution, computers encompass every field of industry. Thanks to the effective combination of computers with cyber-physical systems, Internet of Things (IoT), and Internet of Systems, intelligent factories have become a reality today. The development of intelligent factories means a lot of new benefits for the manufacturing industry.

As machines keep getting smart, they can access more data to evaluate and give back customized solutions and help us make better decisions. Such advancement also reduced human involvement drastically, thereby reducing the chances of human errors and miscalculations.

Industry 4.0 strives to work on the principles below, and every business owner thinking of incorporating Industry 4.0 must consider these points. 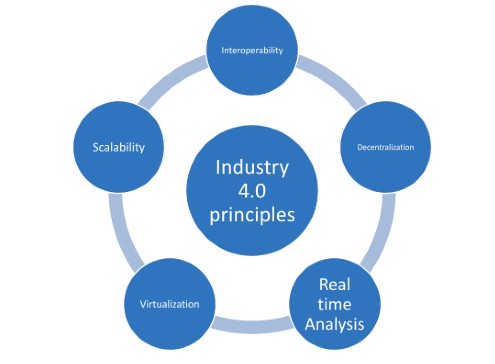 Since Industry 4.0 pertains to new-age technologies coupled with factories to facilitate high production and smart operation, here are the key players in this landscape:

IoT is probably the most important breed of technology to impact the industrial domain. IoT involves specific electronic devices connecting machines with other web-enabled devices to enable data collection in large quantities. This extensive collection of data can be analyzed, exchanged, and used for end-to-end decision-making.

Cloud computing is the keystone of Industry 4.0 architecture. Smart factories demand great connectivity and integration of various departments such as engineering, logistics, supply chain, sales & distribution, service. This is where cloud computing comes into play. A significant X factor of cloud computing is its ability to store a large quantity of information with minimum costs. This helps small and medium-sized companies in keeping, managing their data, therefore, reducing start-up expenditure. Anyone with a bit of common sense would rather have a one-for-all online store that cuts back maintenance and storage costs than an ample storage room built just for that purpose.

Real-time production tasks require some data analysis and decision-making right at the start, that is, creating such data. This phenomenon is also referred to as "on edge" and termed Edge Computing. Edge computing is more of a topology order than a technology prowess. There are loads of information that need to be relayed back & forth from the cloud and factory floor in minimum time. This is where edge computing comes into play by placing the data storage and computation closer, thus reducing response time and improving real-time solution-making ability. Edge Computing also solves data security issues.

It is a given that once you own a business, you're deemed to secure it from all sides and every aspect. Cybersecurity is as critical in the Industry 4.0 scenario as the other technologies mentioned above. Therefore, every IT and OT equipment must be tightly knit with cybersecurity tech. Surveillance cameras, smart probes, and AI-driven video monitoring systems are ready-to-go tech devices to push the cybersecurity factor. To read more about Smart Surveillance and monitoring system, visit blogs at iNetra.ai. 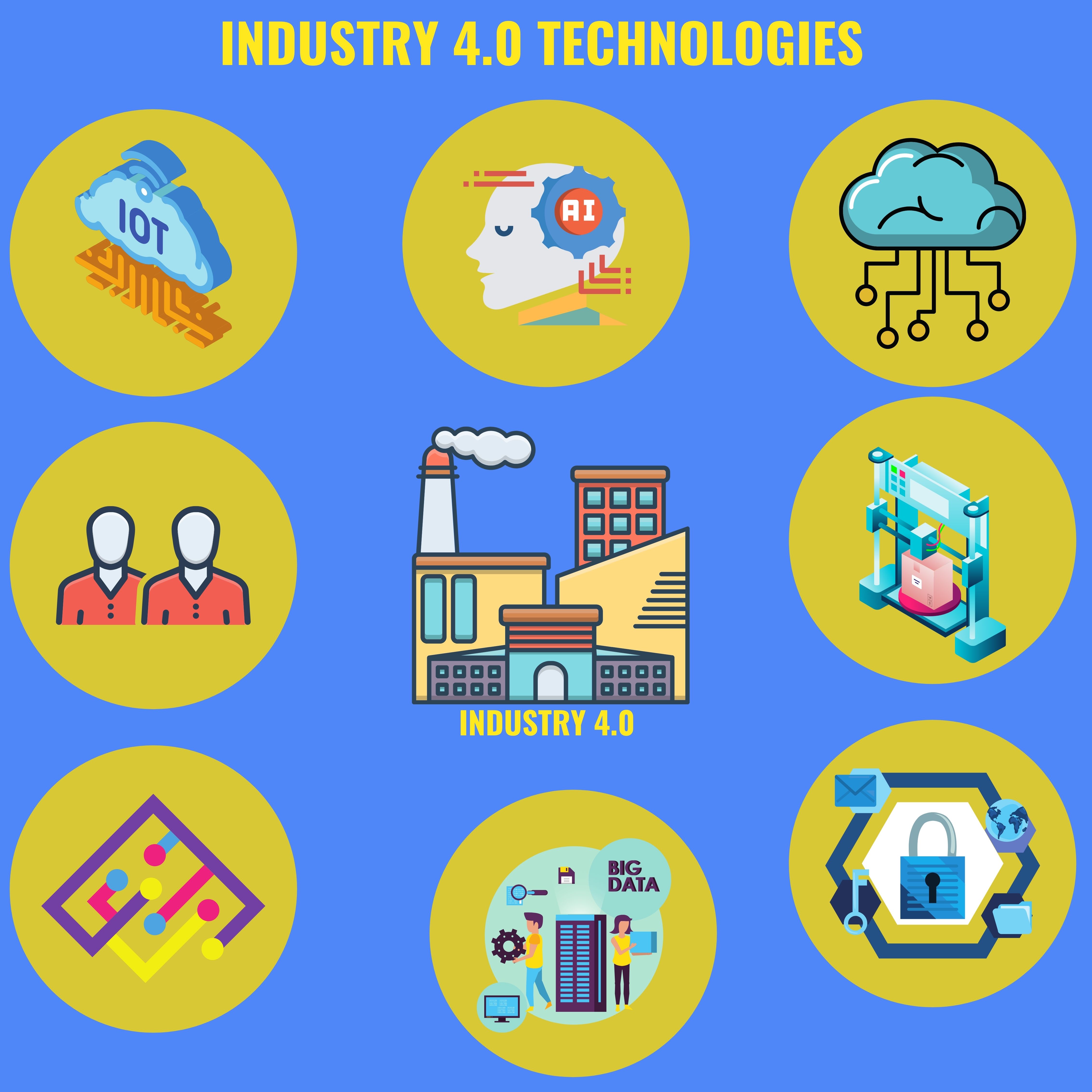 The most talked-about technology of the 21st century, AI and Machine Learning, has elevated the world tech landscape more than any other tech revolution. It is the prime reason for the decrease in human labor as machines & computers become more intelligent to handle industry operations. AI and Machine Learning enable manufacturing firms to take advantage of a large volume of information generated on the factory floor and across multiple business units. AI and Machine Learning provide insights regarding the prediction, automation of operations and business processes. To read more about AI, refer to Artificial Intelligence under our Blog section.

Industry 4.0 has brought in the concept of Digital Twin, which is a virtual replica of real-world installations, processes, factories, and supply chain. These twins are created from data collected from IoT devices, cameras, PLCs, and the cloud. Since digital twins replicate original entities, they simulate actual processes, workflows to boost manufacture, production. Manufacturers and engineers put digital twins under tests to ascertain a specific entity's working acumen or design a new, better alternative. Yet again, digital twins are effective at lowering testing costs.

Additive manufacturing, popularly known as 3D printing, has evolved tremendously in the previous decade. From prototyping to actual production, additive manufacturing has come a long way. In addition, advances in 3D printing technology have unlocked new avenues in terms of productivity improvement.
Apart from that, Industry 4.0 provides better control, overview, and visibility over the entire supply chain. Leveraging a supply chain management system, companies can deliver products faster to the market at a cheaper rate. In addition, it gives them an edge over their competitors.
The goal of Industry 4.0 is to allow for the autonomous end-to-end process and enable real-time value creation. Although it cannot be realized overnight since transitioning to industry 4.0 requires a carefully scripted and staged approach.
Industrial 4.0 is an information-centric evolution of manufacturing and other related industries. The entire environment is wired with men, machines, data, processes, smart devices interlinked to each other, programmed to give out valuable data ready to be analyzed, assessed for a better output. As of now, Industry 4.0 has provided a broad, clear picture of what it is and how it aspires to evolve in the following decades.