The emergence of Artificial Intelligence in recent years has shifted the dynamic of technology’s interaction and implementation in a way seldom seen. The fact that machines can think, analyze and operate like humans have been raising eyebrows since its inception. Artificial Intelligence, Machine Learning is deemed to be the most sought after field and career option in the coming decades.

But what is so captivating about AI ML? What is it that sparked fears of AI ML taking over human labor?

Inarguably, it is the essential attribute of AI – Intelligence and Learning.

Humans are the only species in the world whose intelligent quotient surpasses any other species by a wide margin. Whether due to evolution or otherworldly miracles, it is safe to say that humans stand at the top of the food chain and dominate the ecosystem like no other. This dominance can be credited to human intelligence.

Although there is no definite description for intelligence, one of the greatest scientists of the 21st century, Stephen Hawking famously quoted, “Intelligence is the ability to adapt to change.”

Intelligence can be thought of as an ability to acquire and apply knowledge or skills. The broad spectrum of intelligence covers abilities like understanding, logic, self-awareness, emotional experience, reasoning, planning, critical thinking and problem-solving. Although some of these abilities are found in every other animal species out there, humans surpass them by a long shot.

So what is it that humans do differently and better than others. Here are a few examples:

Learning is an essential factor in the field of evolution. Without learning capability, humans would not make it this far. Most of the animal species have a distinct learning curve, which helped them overcome adversities and evolve accordingly.

Learning is a process that causes “change” as a result of acquiring new or modifying existing knowledge, behaviors, skills, values, or preferences.

Learning facilitates the prediction of data based on the understanding of the model and gathering actual observations. These observations are compared with the predicted outcomes to differentiate between the two sets.

Approach to AI ML through Intelligence and Learning

The conventional method of problem-solving through intelligence and learning covered a one-time pre-defined rigid model which, when running through the application, yields a definite result that couldn’t be processed any further. Such a method consists of strict one-way inputs which are mostly theoretical. This approach negates the learning process and presents a limited scope for refinement. The conventional means of that takes a lot of time and once completed, it can be considered done and dusted. 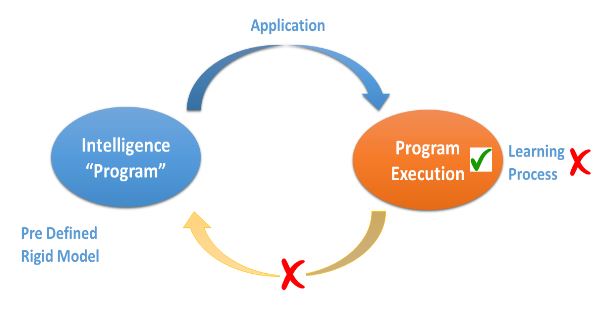 The AI ML approach, however, takes a more flexible route as it enables the extraction of information from time to time, understanding the essence of information, and refine or adjust a model as per the findings. Such a method consists of various environmental inputs that might vary from time to time to draw several conclusions. The results are extracted to pull the absolute intrinsic or indispensable quality of something, which determines its character. AI ML approach to problem-solving facilitates adjustment of the model in accordance with its character to further run it through application again.

Although AI ML has imitated human intelligence and learning capability to a reasonable extent, the game is far from over. Humans being complex creatures has a wide range of intelligence, namely Logical-mathematical, existential, interpersonal, linguistic, bodily-kinesthetic etc. Humans can also derive the meaning of cosmic entities far from the reach of an AI machine for now. It remains to be seen how far AI ML will go considering this is just the start.